Journey to the Centre of Mindfulness and Excellence 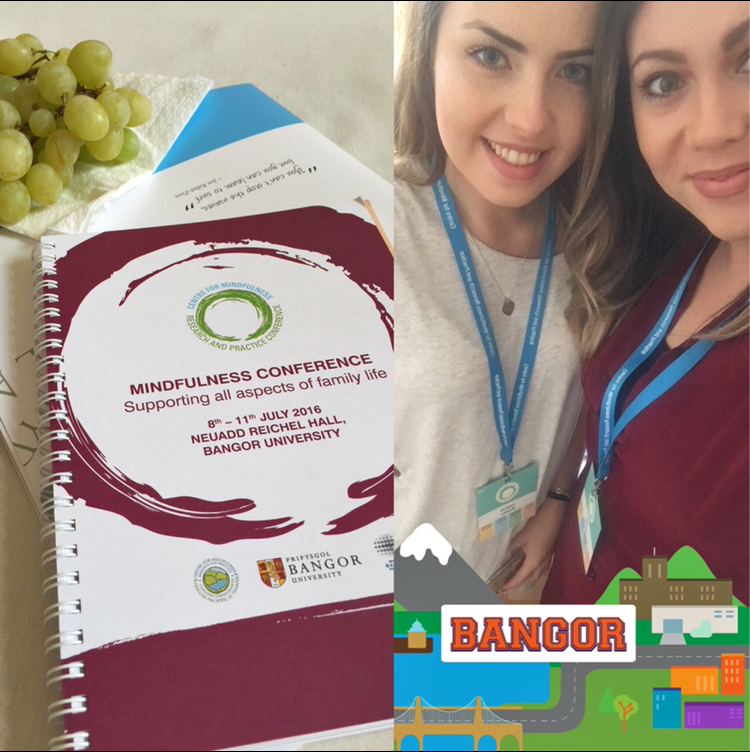 Assistant Psychologists, Jade and Jasmin from the Bryn Melyn Care clinical team attended a 3-day mindfulness conference at Bangor University; The Centre for Mindfulness Research and Practice. Here Jade recounts their experiences of the training and thoughts for the future.

To begin, it might be useful to understand what we mean by the term mindfulness.  ‘Mindfulness means paying attention in a particular way; on purpose, in the present moment, and non-judgmentally’ – in the words of John Kabat-Zinn, a scholar who is often referred to as the founding figure for bringing mindfulness forward into the western world. Many of you may have heard of mindfulness because of its growing popularity. A vast array of provisions including health, clinical, education and employers are beginning to recognise the benefits of mindfulness in relation to improved well-being. The National Institute for Health and Care Excellence (NICE) recommend mindfulness as a way to prevent depression in people who have had three or more bouts of depression in the past. The clinical team in Bryn Melyn Care recognise its role in supporting young people and staff alike, as such were thrilled when an opportunity emerged for further training and practise in mindfulness was offered.

Here Jade accounts their experiences of the training and thoughts for the future:

Day 1: After waking up fresh and with a sense of surprise that the Premier inn lived up to their promise of a good night’s sleep, we were ready to seize the day! Arriving at the wrong venue and thanking ourselves that we had left the hotel early in case of mishaps like these, we set back off in the car and finally arrived at the capital of our mindful journey. The organisation of the conference was next to none, we were ushered in and given the essentials; lanyards, hand out packs and an itinerary for the full 3 days. After navigating past the free tea & coffee (a quick pit stop here of course) we were set for our first workshop!

Now for the first obstacle, where to sit, what table? Those people look friendly, maybe over there? But it’s a bit close to the front, nobody wants to sit at the front!  Seats were chosen with note pads open and at the ready. With that we were introduced to Philippe Goldin – a guru of mindfulness with a wealth of knowledge; he trained for three years in a monastery in the Indian mountains and spent a number of years learning from the Dali lama’s interpreter in Nepal! His enthusiasm was awe-inspiring; he captured our attention without a flicker of mind wandering (very mindful indeed). He spent time teaching about the principles of mindfulness in terms of their origins, in the East. We learned that our western views and teachings of mindfulness have far ventured from their humble beginnings.  His passion for mindfulness transported you to the East and offered a wider perspective on this fascinating topic.

Throughout the day we heard a number of other professionals and teachers offer their perspective, their teaching, and some hands-on practices- some of which exciting and others more textbook. What stood out over the course of the day was what novices we were to the world of mindfulness. “Hands up if you have completed a Mindfulness-based Stress Reduction programme”- a sea of hands appeared, but not ours. “Hands up if you have been on a 3 or more day retreat”- the same hands were up and ours remained by our sides, flush-faced and wondering if we were in over our heads. We waited for the next question, “hands up if you have had training in mindfulness”- finally ours were up! We spoke to people around us and they shared their experiences of MBSR and retreats but what struck us was that whilst they appeared to have more experience we had a passion for learning on our side.

Day 2 – What next? After a day of increased knowledge, we hoped today’s workshops would offer something more practical. Thankfully the day did not disappoint and we were granted a day of group exercises. I won’t give too much away about the tasks as you never know when they might come in handy….. But I won’t deprive all the details. Our afternoon workshop ‘mindful movement’ was probably one of the most intimidating yet liberating experiences of the conference. This workshop looked to explore and refine our movement abilities through a combination of Yoga, Pilates, mindfulness and developmental movement patterns. Here the instructor gave a series of commands to follow and our bodies were left to do the rest, how we interpreted the commands were entirely down to us as an individual. Bizarre you might think? Being in a room of 40 adults commanded to ‘feel the movement of their bodies and glide’ was definitely a moment you had to push all judgments aside and just go with it. Learning to let go and essentially be in the moment was something we both developed from this weird and wonderful workshop.

Day 3 – The final day was upon us! An entire day of mindfulness practise, initially thoughts were filled with excitement and curiosity for what the day would bring. However, after morning practise we were informed that we were expected to not make eye contact with other attendees and we would be in silence for the majority of the day. Soon we were plagued with an overwhelming sense of dread and scepticism, how could two social creatures that make a living from talking manage an entire day of silence?

Advised to sit in a comfortable position on the mat and just sit with our breath until instructed otherwise, we were left with our thoughts. 30 minutes in and struggling to keep my attention on just my breath, I realised my mind couldn’t settle whilst my back was hurting. I decided it best to grab a drink (green tea of course) and a moment to myself, shortly after I was met by my colleague and companion who too had the same thoughts & concerns. Though our disappearance hadn’t gone unnoticed, a kind participant had seen our struggles and joined us. We shared our worries with her and she met these with empathy and a smile, telling us she had been in the same conundrum many years ago. With a sense of understanding, she took us to a separate room and showed us how to sit (yes there is a right and wrong way when meditating mindfully), she showed us how to use the equipment and also reminded us to be kind to ourselves.  With our new found knowledge we re-joined the group and worked through some guided meditations, a body scan and some practice of mindful movement. Sure enough, we had got through four hours of practice in what felt like little more than an hour. This was proof that with the right support and attitude we could do this!

So now where you might think? Where did this learning take us? Well after being left with both doubt and inspiration we were faced with two challenges; wanting to develop a workshop for staff within BMC so you too could experience mindfulness and what it has to offer, but also to come back and further develop our own practice.

Here we are six weeks on from the conference and can share our developments with you. We have kept our promise for personal and professional development and have kept up a practise of mindfulness. Personally, I had initially vowed to practise seven days a week for 20 minutes but often found this difficult to stick to. Six days a week sounded doable, but some days were harder than others to find the time. Our society is one of speed and demand, living a fast-paced life and often trying to juggle the demands this brings, with things we need to do and what we want to do, we often end up sidelining areas we don’t see as vital. But what we found was that mindfulness was vital and continues to be vital. Through practise we found our minds were wandering far less frequently and we were much more aware of our internal state which made it easier to listen and respond to it.

Mindfulness is a mental state achieved by focusing one’s awareness on the present moment, while calmly acknowledging and accepting one’s feelings, thoughts, and bodily sensations which in essence does really take the thunder out of the storm; the rain still comes, but you can appreciate the gift that this brings without fear of a strike of lightening.

Don’t take our word for it, try it! We are organising a mindfulness workshop, open to all Bryn Melyn Care staff if you’re a beginner or a skilled mindful Jedi, whatever your level, it will be a great opportunity to learn or share your knowledge.